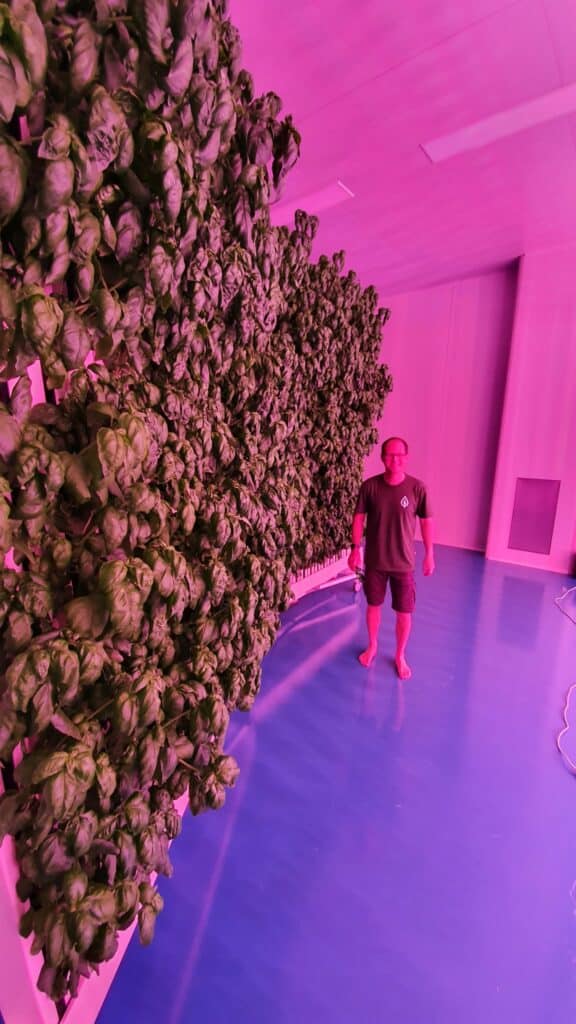 About the Farmer: Christian Gerig

Since graduating from the Business Administration program, Christian Gerig has worked as an entrepreneur. He began his career in the timber sector, where he spent several years. Christian became increasingly interested in the sustainable wood market and established his bamboo business shortly after. He was content to have his own bamboo forest and extraction factory in China, which he had been working on for roughly ten years. Unfortunately, he had to shut down after the COVID pandemic.

This shifted Gerig’s focus to wanting to do something in his community utilizing local resources rather than relying on vendors. Switzerland is notorious for its long, severe winters, making it an unsuitable location for relying on raw materials. As a result, Christian decided to invest in an indoor growing farm, as it will provide a wonderful way to manage the environment while also allowing him to grow one of Switzerland’s most demanding and popular products, herbs.

In cultivating these fresh herbs, Gerig’s major goal was to eliminate the usage of pesticides. According to Gerig, Switzerland has clean drinking water, but it has become more tainted with chemicals. Gerig was inspired to create a system that used fewer resources and didn’t require pesticides, and ZipGrow™ was the answer.

Gerig’s favourite resource for finding answers to queries like how to run a vertical farm was the ZipGrow™ Youtube channel. Gerig remarked that he “wanted to become a farm operator, not a farm developer,” and this was very important to him. After learning about ZipGrow™ and the resources available through the ZipGrow™ team, he felt confident that he could begin the process of establishing his indoor vertical Zipfarm™, Lokal365.

Gerig, his mother, his wife, and a few other members were among the founders of Lokal365, which was built in St. Gallen, Schweiz, Switzerland, in September 2020. Lokal365 has partnered with and is working with two of the country’s leading grocery retailers, Migros and SPAR, who are now its two most important customers. Just recently, the company increased its capital to one million dollars. The indoor farm is housed in a 500-square-meter facility with a green room containing ZipGrow™ Towers. Lokal365 will be expanding to 990 towers by the end of this year.

Lokal365 is mostly focused on herbs, particularly basil. Basil is in high demand all year in Switzerland, thanks to the great influence of Italian cuisine, and is commonly used in many of their basic dishes. Gerig is very interested in producing basil water, and he believes that basil water blended with natural mineral water could have a market. As a result, not only basil will be sold but Gerig will further develop methods to extract basil to sell liquid, aromatic basil water.

When discussing ZipGrow™ systems, Gerig mentioned how much he liked the notion of being able to remove the tower, place it on a table, and harvest the herbs. He stated, “I’ve never seen a water-efficient system before”. He is also content with the fact that he is able to control everything from the Atom Controller which helps to control his water system and gather data for his farm.

When asked what advice he would give to prospective farmers interested in purchasing a ZipFarm™, he offered the following three suggestions:

1. Research and choose the ideal location, one that is close to your target market.

2. Look for a market for the items you want to sell and examine the market price.

Gerig is expanding to 990 towers by the end of this year, and in the long run, the company intends to operate at least ten farms in Switzerland. His greatest issue, though, is to find locations in larger cities like Zurich and Basel-City that are close to his customers’ distribution centres. With the help of the ZipGrow™ team and positive feedback from his consumers, he intends to expand Lokal365 throughout Switzerland and provide a new variety of basil products to the market!