The Evolution of the ZipGrow Farm Wall Design 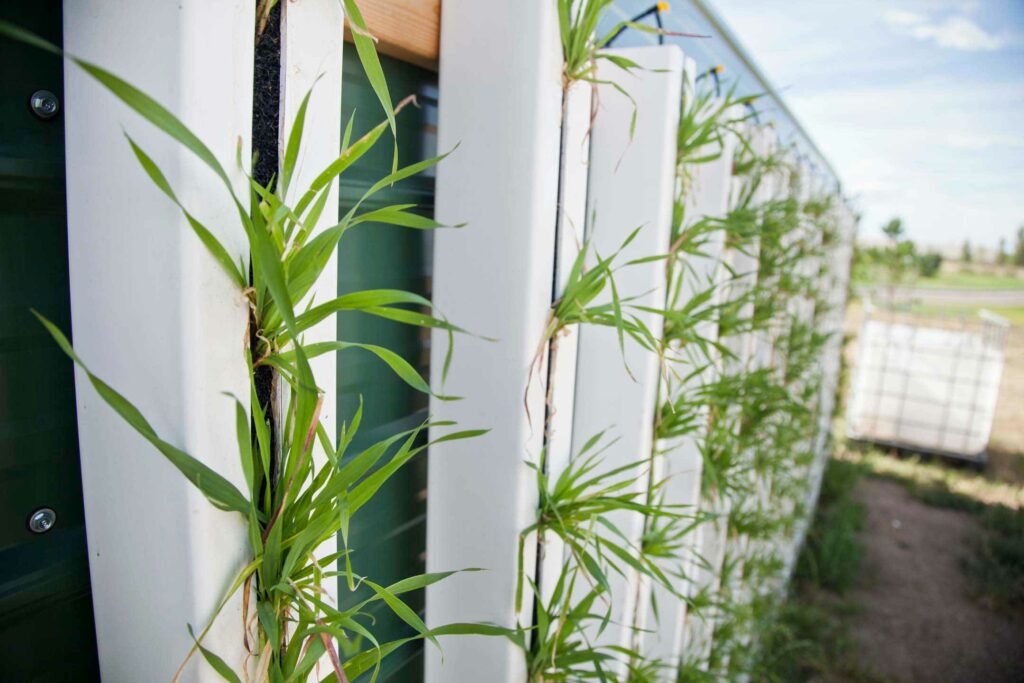 In 2012 we started a journey to creating the best living wall of plants in the world. We’ve made a lot of progress. Here’s some photosof our progress! 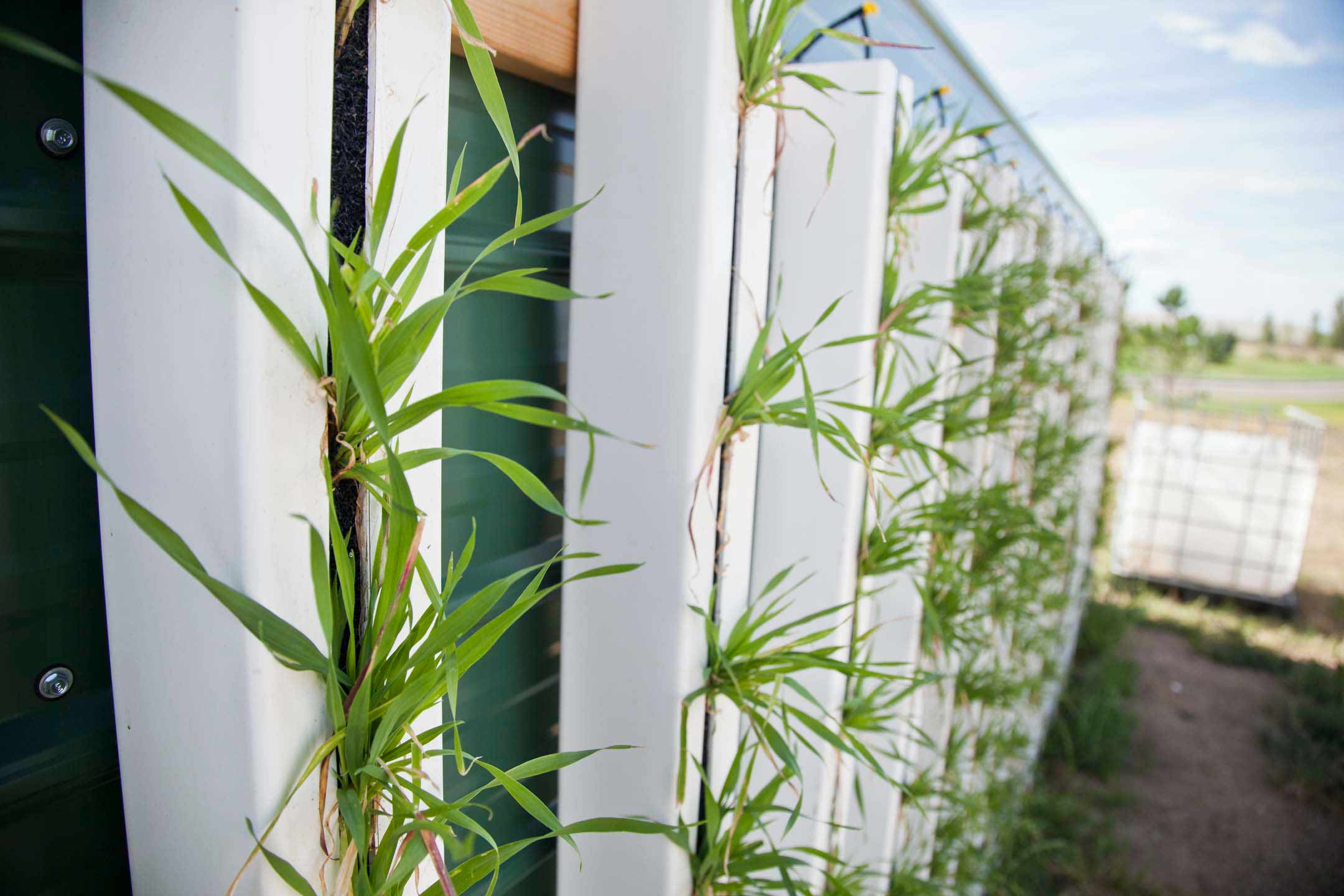 The prototype was a 6.5 foot-tallgreen wall with about 15 towers hanging from the side of our fish house and hooked up to be irrigated wish fish waste from our main aquaponics system. As you can see, it looked pretty nice.

The drawbacks were that the side of the fish house wasn’t sheltered from our violent Wyoming winds,and our crops were limited. We could grow cold-weather crops and grasses, but not the herbs and tender greens that we love so much.

After trying out a few different kinds of crops, we chose to stick with barley, which looked nice, was hardy in the wind and cold, and would tolerate a day or two without water in case one of the irrigation lines got clogged. (That happens sometimes when you’re fertilizing with fish waste.) An added plus to using barley was that we could switch the whole green wall off for the winter and the barley would remain and look nice. (Like and ornamental grass on the side of the fish house.) It also provided some insulation! 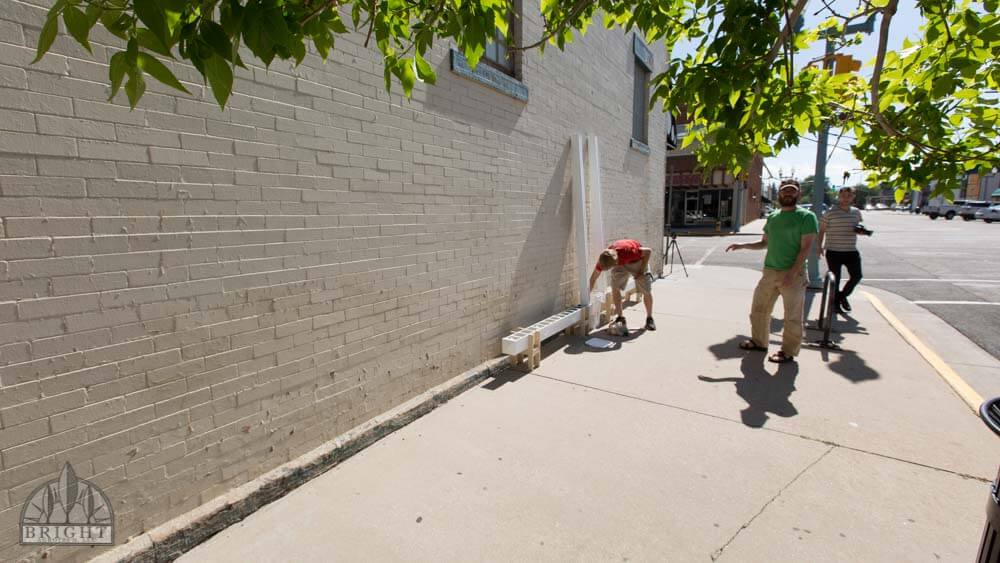 Good, but not good enough.

We liked that prototype, but we wanted to make something even better – something that would clog less (solids from the fish tanks tend to clog drippers in the first farmwall, so they had to be checked every day), something that you didn’t need a greenhouse for, and something that could grow more crops.

The next green wall we built was a hydroponic prototype. We set it up in downtown Laramie on the outside wall of Altitude’s Chophouse and Brewery in the spring of 2014. 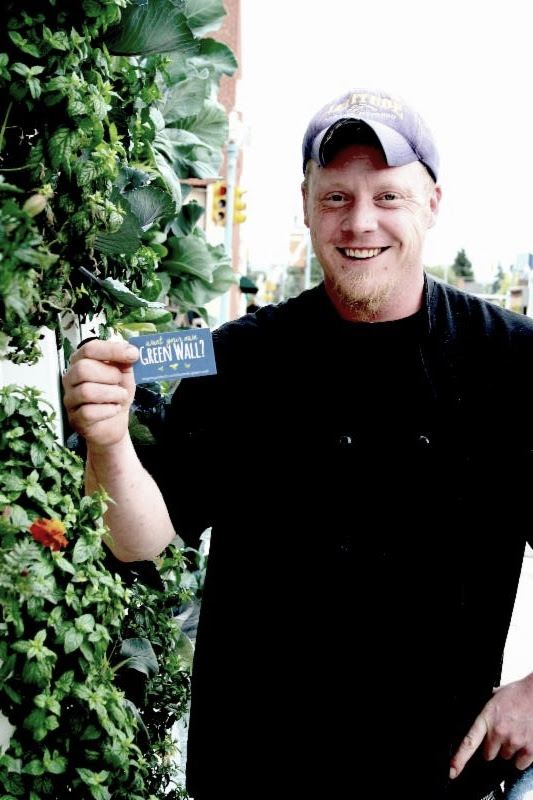 After the initial farmwall went up, we added another two sections, connecting the irrigation to the main sump tank. With a bit more shelter from the wind, a good-sized sump tank, and fewer opportunities to clog with the hydroponic solution, we were able to grow a variety of crops. We grew flowers, tomatoes, greens, and herbs.

There were a few perks that we didn’t fully anticipate.

The heat from the wall, together with the thermal mass of the water in the system, buffered temperatures for the crops in the green wall. Our tomatoes were still alive and producing fruit a month after the in-ground tomato plants had died from frosts, freezes, and snowfall.

Altitude’s chefs were able to use most of the produce in dishes, and even made a basil beer to serve over the summer. Unused towers were brought back to the greenhouse to be harvested and replanted.

Vandalism is one problem which we were nervous about, but which never happened, even though the area has the most night life in town, and there are several bars inthe area. Would it have survived in Detroit? Maybe not. But it’s nice to know that Laramie still has that friendly small-town personality. 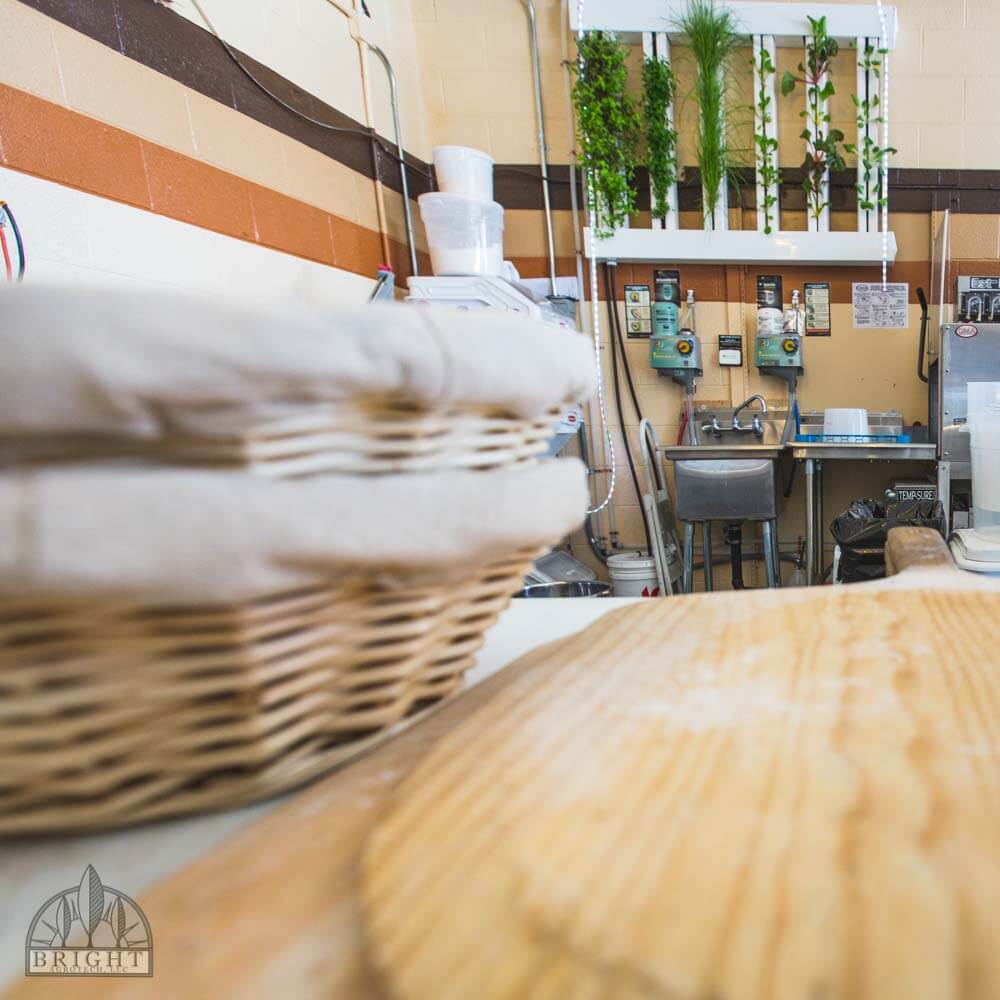 Late in summer we installed the next version of the green wall at a local pub, the Alibi. This time we went with a shorter version so that we could hang it over the counter right there in their kitchen. Although fewer people would be able to enjoy the sight of the farmwall, placing the farmwall in the kitchen meant that they would be able to grow year round, as well as being close and convenient for chefs to use the produce on their homemade pizzas.

This was the best version so far in terms of ease of use. 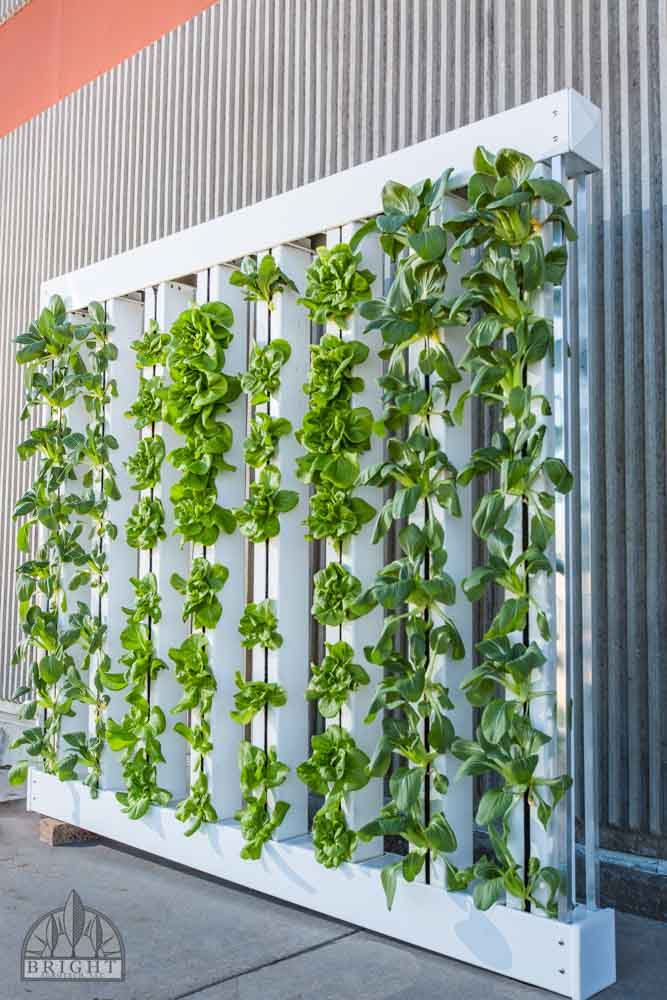 We stillsaw a few changes that could be made to simplify the wall. We simplified the design so that the bottom gutter was closed at both ends and acted as the sump, so that users wouldn’t have to use a separate bucket. Now owners of the wall could just add water by dumping it in through any of the tower holes.

We tweaked the irrigation system and devised a “top-off” tank that would drain slowly into the bottom gutter, eliminating the need for the owner to manually add water. We drilled holes and designed a sliding bracket to make it easy to hang the wall on any vertical structure.

We sold a number of these and each time that we put one together we asked ourselves how we could make it even easier for people to put together. We envisioned users getting the box with their farmwall and putting it together faster than a lego set, then setting it up to maintain itself so that they would only have to check it every couple days – or longer. 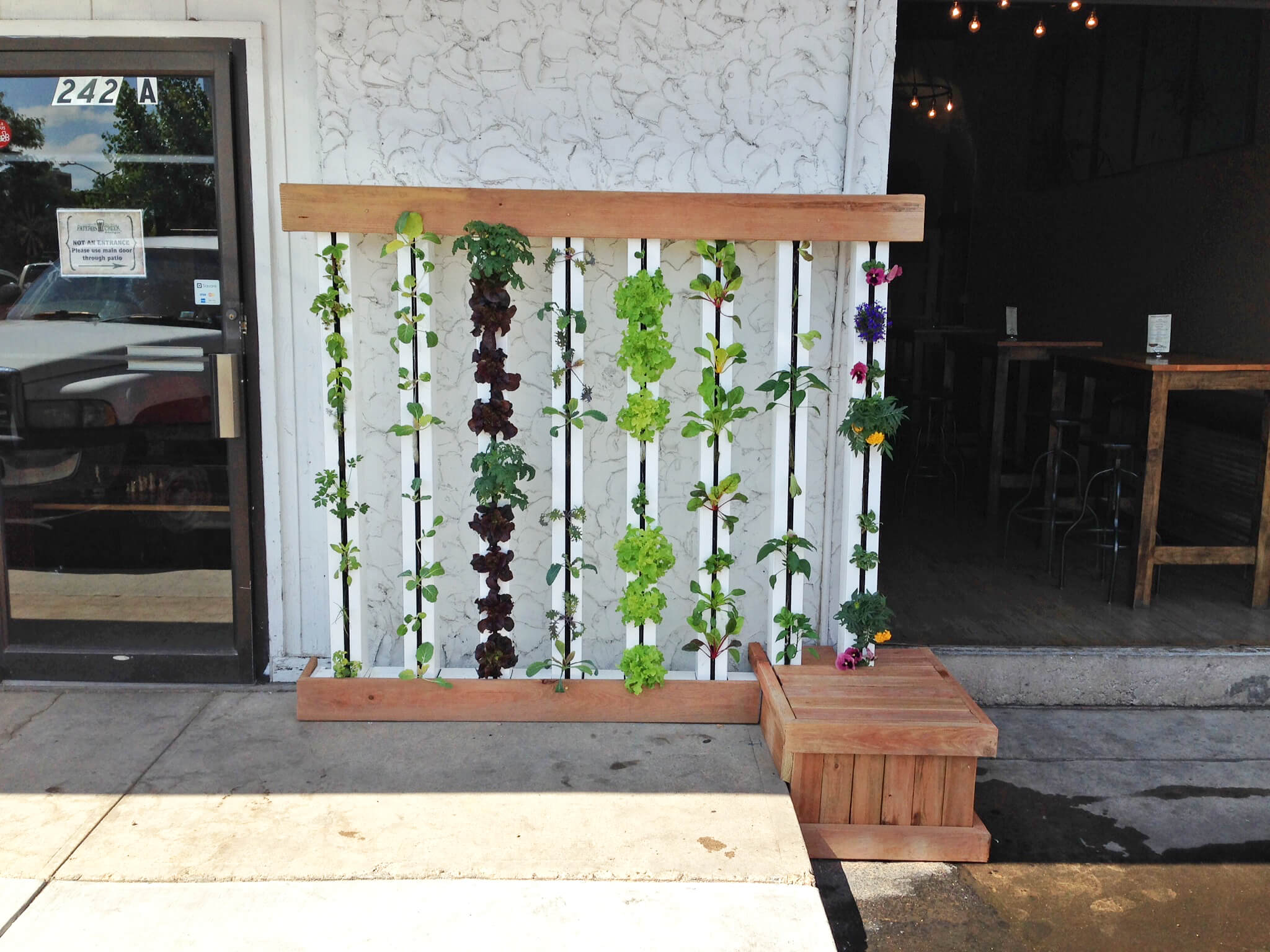 So the R&D team redid the plumbing and tried new parts until they found the simplest way to put together the farmwall. They made it easier to attaching plumbing, easier to access the dripper, and easier to set up in any location. The tweaks in the design yielded great results, and we came into the summer of 2015 with a green wall that could be set up and even moved around easily. 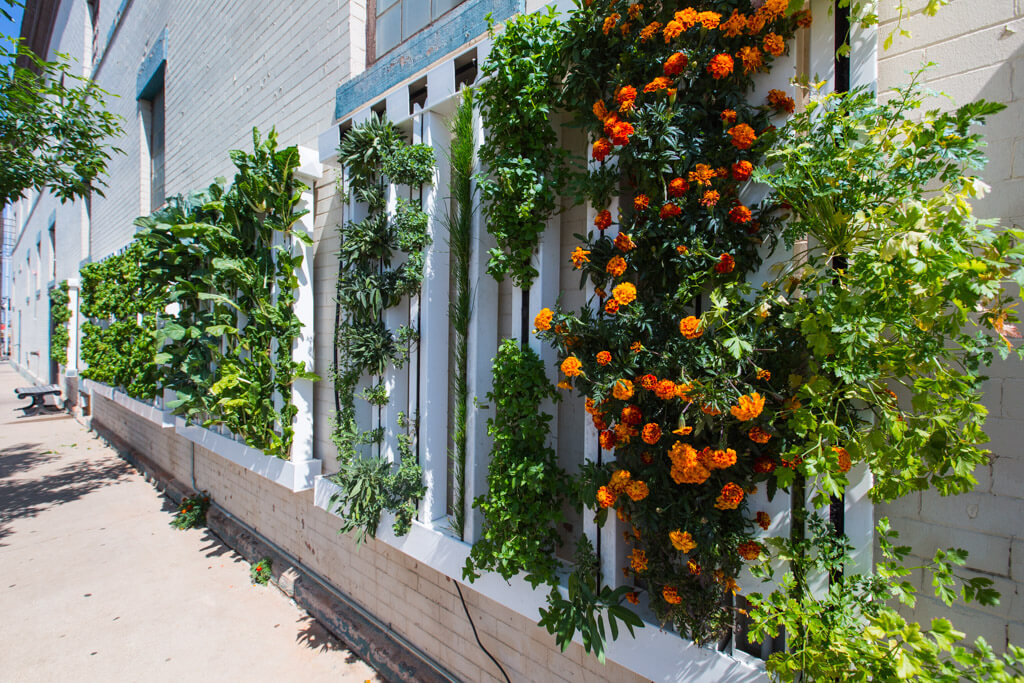 We also began to see a defining characteristic rise above the rest. Upstart Farmers were using Farm Walls to grow food on restaurant patios and kitchens. The huge ZipGrow wall at the US Pavilion in Milan set itself apart from other green walls by growing food.

We realized that Green Wall didnt describe what it was capable of, so we dubbed it the Farm Wall.