Two Of The Most Commonly Forgotten Issues Of Vertical Farming 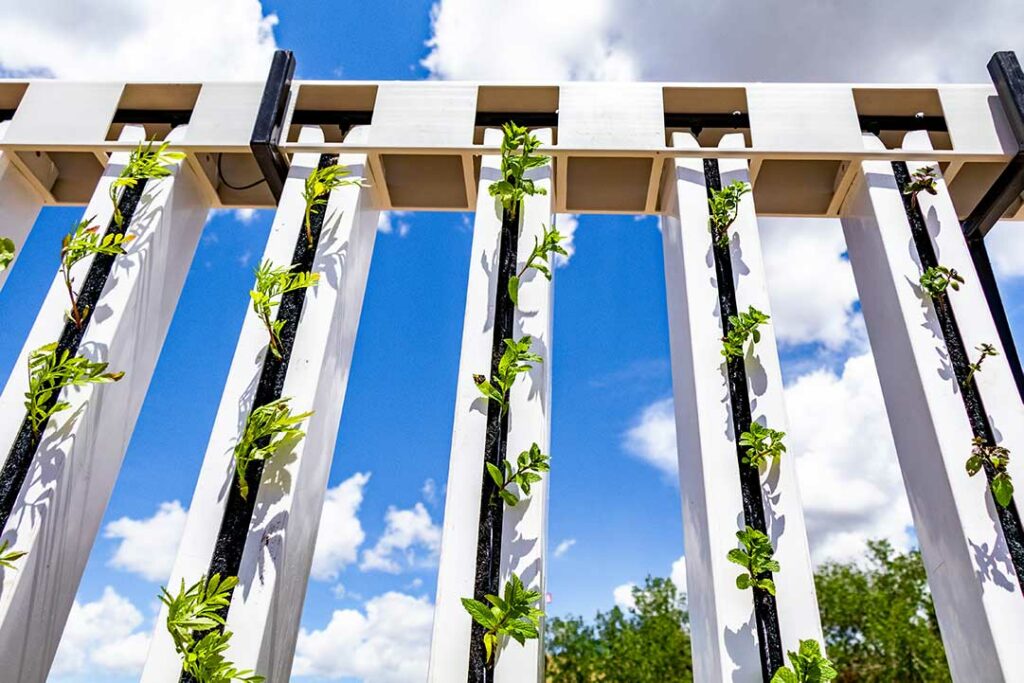 A few weeks ago we published this video on the reasons that we use vertical plane production.

You guys had so many wonderful questions and comments! Many of them had to do with labor and plant management in both production types.

This discussion will address some of these questions and comments, especially in regards to:

Any production oriented farmer knows that farm airflow needs can’t be ignored. If you want to succeed, then you have to actively and aggressively manage airflow. Why?

Indoor vertical farming is not like field production or even low-density indoor production. The air inside an intense indoor growing operation does not move and get replaced. Not without intentional pushing and pulling, anyway. Outdoors or in an open greenhouse, the wind is a fairly constant force moving air around.

Air movement around your racks and crops does three important things:

Excess humidity is easy to acquire. Your plants are transpiring, your irrigation is evaporating… too much humidity is harmful because it creates a favorable environment for pests. Air movement through crops and foliage is necessary to the removal of humidity.

Though removal of humidity may sound simple, the task can be tricky. Unfortunately many indoor growers make the task even more difficult with poor equipment choices. To be fair, the equipment options have been limited over the years. Most indoor growers either didn’t have a choice, or had to forfeit another benefit of equipment to get good air flow in their operation.

2) It introduces and spreads CO2

You can tell that the structure of the ZipFarm™ allows for good airflow, which distributes CO2 evenly throughout the operation.

*What do I mean when I say that you want to make CO2 worth your time? Well, one of the big benefits of CO2 is that it increases the plant’s ability to process and use other inputs. A lot of growers using CO2 are then able to increase other inputs. If that CO2 is only reaching 30% of your operation, but you’re still using increased inputs (like delivering more light) to 100% of your farm, then you’re wasting 70% of the additional inputs. ¡No bueno!

3) It moves and spreads heat

Like CO2, uniform temperature is important to maximizing yield, not to mention preventing warmth-loving pests. Underheating your crops can slow down growth, and overheating can stress the plant and open up a whole lot of opportunities for pests to squeeze in and go crazy.

Airflow both spreads heat and allows plants to use their natural heat regulation (like transpiration) more effectively.

Altogether, these three things are responsible for uniform crop growth and play a big role in pest and disease prevention.

Airflow is affected by boundary layers

This is effected by the amount of surface that it comes in contact with (the “bulk”) and the “roughness” of the surface (or the surface area). While the surface area of vegetation makes it harder for air to move through, that’s pretty much inevitable on a farm. What the farmer does have control over, however, is the “bulk”- the larger obstacles that the air has to move around. This is going to be things like walls, large equipment, and closely spaced surfaces.

In a farm with intense boundary layers, a layer of humidity and warmth will form under the canopy of your crops. This area, where the air is relatively unmoved, makes a great environment for pests and detritus to build up.

In a horizontal rack system, one issue you’ll run into is something called “boundary layer effects”. Boundary layers describe the friction that air has with the surface of something.

Horizontal planes and airflow aren’t best friends. Or friends at all, really layers

Horizontal and vertical planes deal with airflow very differently. The biggest distinguishing characteristic of airflow in horizontal plane production is that good airflow and space efficiency are in conflict. The tighter you build the tiers of your system, the harder it is to move air through those planes.

Air is already a bit more difficult to move horizontally (air has a tendency to rise and fall rather than swish back and forth horizontally). To achieve decent space use efficiency, you have to either invest in complicated air movement equipment, or wave goodbye to CO2, temperature, and humidity uniformity.

Visual access is important to pest and health monitoring

If you farm, you watch your crops. It’s just what you do. Being able to see your plants (not to mention the plumbing and structure of your growing equipment) is crucial to spotting pest infestations, deficiencies, and other problems that may arise.

Visual access to horizontal planes is limited to a tier or two without ladders, forklifts, or bending over

If you know us, you know that we choose to grow on vertical planes. Air flow and monitoring are two of the reasons that we went vertical.

When you grow on vertical planes like this, you end up with an aisle that’s several feet wide. The lights hanging into that aisle are small enough that there is very little bulk to impede airflow, which moves almost as though the lights weren’t even there. This means that fans move air more efficiently and quickly than they would through horizontal planes.

There is one part of the lights that affects airflow: fans. If you’re using a light array with built in fans (many LED lights have this), then you’re encouraging airflow on a small scale in addition to your general air movement.

Not only this, but vertical planes (like those of the ZipFarm™) allow air to move naturally upward and downward with temperature.

If using vertical plane production, a farm manager can see (and usually even touch) all plants. If you’re using something like the ZipFarm, you can even see the plumbing (including the individual button drippers) on each plane.

Now I do want to note that management of any farm will at some point require tools like a footstool or a screwdriver. (Say you have a ZipFarm, and you notice that a button dripper has clogged up overnight. You’ll have to get up on a footstool to fix it, right?) There’s no getting around that (yet). But the bulk of the labor that an indoor farmer does in their farm is low-level stuff like plant health and regular monitoring tasks. This is where vertical plane production shines.

We’re dedicated to changing the future of food, and that means addressing the hard issues. You can learn more here on our blog or go straight to see how we’ve practically addressed indoor production issues.

The best turnkey option for indoor growers is theZipFarm™, which gives not only great airflow and ease of monitoring to farmers, but also allows them to scale easily and use the Live Sales Model.