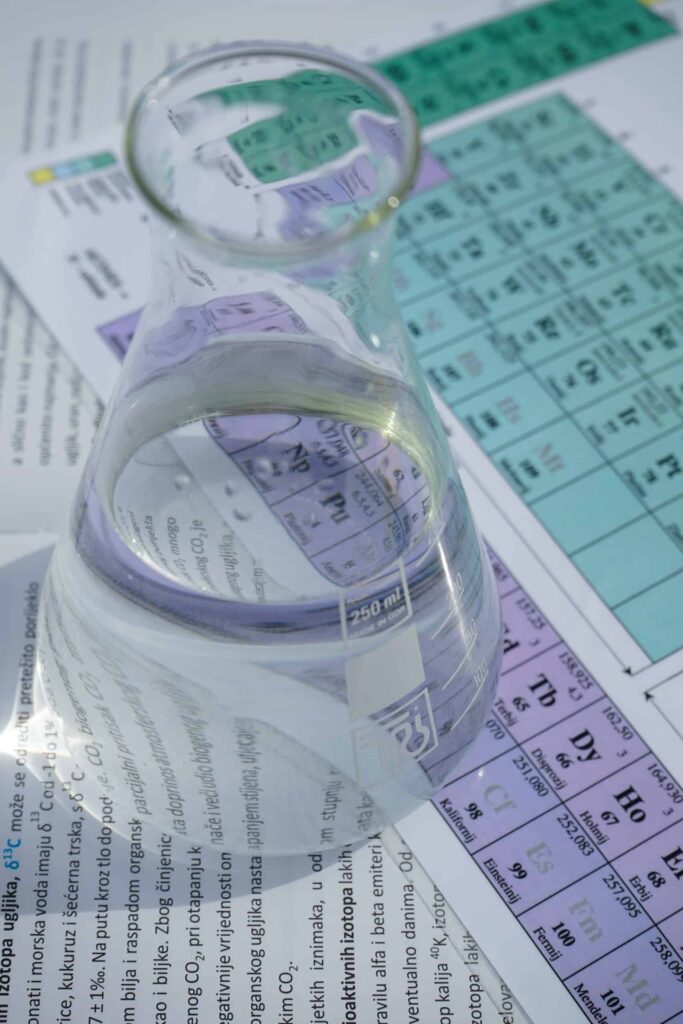 Why is Iron Important?

By mass, iron is one of the most plentiful element on the planet, and one of the oldest metals known to and used by humanity. It is also an important plant and animal nutrient and thus, very crucial to your aquaponics system.

Iron is very reactive- that is, it exists in a variety of ionic states (from +6 to -2) but exists primarily as Iron++(II; Ferrous Iron) or Iron+++(III; Ferric Iron) and transitions readily between them depending on environmental variables.

For this reason, oxygen is an important component in many organic molecules that fix oxygen, or moderate REDOX reactions.

In animals, the most common iron containing substance is heme complexes. We’re most familiar with hemoglobin. In hemoglobin, iron helps bind oxygen for transport throughout the body.

In plants, iron serves many functions but is an essential component in the production of chlorophyll, the site of photosynthesis.

Without enough iron, plants cannot produce enough chlorophyll, leading to retarded plant growth characterized by interveinal chlorosis. Iron is also a key component of cytochrome- a hemeprotein that plays a key role in ATP generation- the currency of cellular metabolism.

In this capacity it is irreplaceable to both plants and animals. Iron is also plays a major role in many other proteins and reactions.

Unfortunately, because it is highly reactive, iron is typically unavailable.

It flits between soluble and insoluble forms, forms compounds with other minerals and (in aerobic environments generally) plays hard to get.

The issues with iron in aquaponics

This poses a problem for aquaponic producers. Because systems are generally aerobic (and certainly aerobic in the root zone), iron deficiencies can often arise- even when there is technically plenty of (ferric) iron within the system.

In the aquaponic solution, iron is commonly available in one of two forms- reduced, soluble ferrous iron (2+) and insoluble, oxidized ferric iron (3+).

Ferrous iron is available to plants (soluble!). Ferric iron is not (insoluble).

This is important to understand, because ferric iron is the more oxidized form, whereas ferrous iron is not.

In short, as soon as ferrous iron becomes soluble in aerobic envrionments it is often oxidized, becoming ferric iron or reacts with other compounds to become biologically unavailable (especially at high pH values when different hydroxides are formed).

Now, this relationship between oxygen and iron isn’t a full time thing. In reality iron is flitting between ferrous and ferric states, but the dominant state in high pH and oxidized environments is ferric- and this means that your plants cannot take it up.

These details important because they dictate how we examine the solutions.

Many practitioners throw rusty iron items into their systems falsely assuming that this will supplement system iron.

In a sense it does add to the reservoir of system iron, but not in a constructive or meaningful way. All this does is introduce more ferric iron to the system- a form of iron that was most likely already in plentiful supply.

Other practitioners intentionally develop dedicated anaerobic zones, where ferric iron will be reduced by the oxygen free, anaerobic environment to produce ferric iron. This is a more compelling approach, especially in low pH systems, but still does not entirely address the problem of getting the reduced iron ion (Fe++) through the oxygenated aerobic zone surrounding the plant roots (especially in high pH systems where hydroxyl ions are plentiful!).

In low pH systems, ferrous iron has a much better chance of reaching the root zone, simply because there are fewer hydroxyl (OH–) groups to react with along the way, however even in the absence of hydroxyl groups, there are many other chemical obstacles to reaching the plant root zone in adequate quantities.

Plants have adapted to this issue.

This is a problem, but one that has not been overlooked by nature.

You see, plants have been contending for these nutrients for eons, and as a result have developed some amazing chemical means of hijacking ferric iron ions, tying them up, bundling them into the soluble, biochemical equivalent of the panel van, and delivering them, bound and gagged, to the root surface for plant use.

Plants also use a few other techniques to make iron available, including acidifying the root surface by excreting hydronium ions, and secreting iron reducing compounds. But for the sake of aquaponic system management, this first biochemical iron fixing technique is what we will focus on.

This process is called chelation- that is, tying insoluble ferric iron ions and compounds to organic molecules to make them soluble.

In the plant world, chelatins are produced by the plant roots and leaked into the soil capture and deliver insoluble iron ions.

(As a side note: a great deal of research is being done on using barley to produce siderophores for iron sequestration, and holds some interesting implications for aquaponic system where practitioners are willing to grow barley.)

These are compounds that help keep the iron soluble and biologically available to the plants and algae in the system. While these compounds can be introduced, and humic or “tea-water” solutions can be fostered and managed, they aren’t always enough to keep iron available to the plants- especially in systems with a pH or 7 or above. In these systems, an artificial chelatin is often required.

Because I use peat potting mixes for all of my seedling germination and transplants, my systems typically maintain high levels of humic substances. However: I still supplement chelated iron regularly.

Iron is one of the plant nutrients that must be supplemented in almost all aquaponic systems.

To supplement iron, chelated iron must be added to systems.

By adding chelated iron, iron deficiencies in your plants can be avoided.

This is a slightly toxic form that aquaponic practitioners should not use. This type of chelated iron is commonly used as an herbicide to kill broadleaf weeds. It should not be used just because of it’s toxicity, but also because it typically only effectively chelates iron up to the pH range of 6.3 or 6.4. Above this range it is not a stable chelate. So, using FeEDTA in your consistently pH 7.0 system represents a significant amount of money wasted in comparison to other forms of chelated iron. For this reason I recommend that AP practioners do not use FeEDTA. It is ironic that this is the most commonly sold and used form of chelated iron in aquaponic systems as it is fairly ineffective- the equivalent of modern “aquaponic snake oil.”

This is what I recommend for most systems at pH values between 6 and 7.5. It is commonly available at lawn and garden stores.

This is what I recommend for systems above pH values up to 9.0 (let’s hope your pH never gets that high!), and the best all-round form of iron chelate- especially for starting systems. Effective at a broad pH range, FeEDDHA maintains iron solublility in almost all of the water conditions encountered by startup aquaponic systems

Chelated iron fertilizer is available from many different suppliers. I typically get mine from the local hardware store.

There are two schools of thought on chelated iron addition.

Some say that chelated iron should be applied any time you see deficiency. This is a reasonable and reactionary dosing method, but ultimately means that your plants must first suffer from iron depletion and deficiency before the problem is addressed. In this scenario plant production can be negatively impacted. The other (and better) school of thought is to apply iron at the standard UVI system rate of 2mg/L every three weeks.

Iron can also be applied through foliar application- using either chelated iron or ferrous sulfate mixed at low concentrations. Foliar application is great for fast response, but because iron isn’t a mobile nutrient inside plant tissues, iron will have to be supplemented regularly using this method- a time consuming, and ultimately less effective iron supplementation method.

Using this method, iron can be regularly dosed so that iron deficiencies do not arise in your system.

While many practitioners complain about cost, when bought in the 5-10 pound bag, chelated iron is really not very expensive, and often even in large commercial systems, will last for many months.

At the dosing rate above, a 10 pound, $15 bag of chelated FeDTPA will last well over a year, or less than $1 per month. At higher iron concentrations it will last much longer.

We’ve had several folks ask about where they can get good iron supplements and how much they cost. Here is that info:

All of these products will work great in your system!

A friend and blog reader let us know about this product that seemed to have turned his entire system water red after adding 3 ounces. It appears the Miller’s product contain red dye! A dye probably won’t hurt your fish, but double check to be sure.

We hope that this blog post is helping you keep your system healthy. To learn more about aquaponics and ZipGrow systems, check out our Youtube channel.