What is Hydroponics? A Brief Introduction 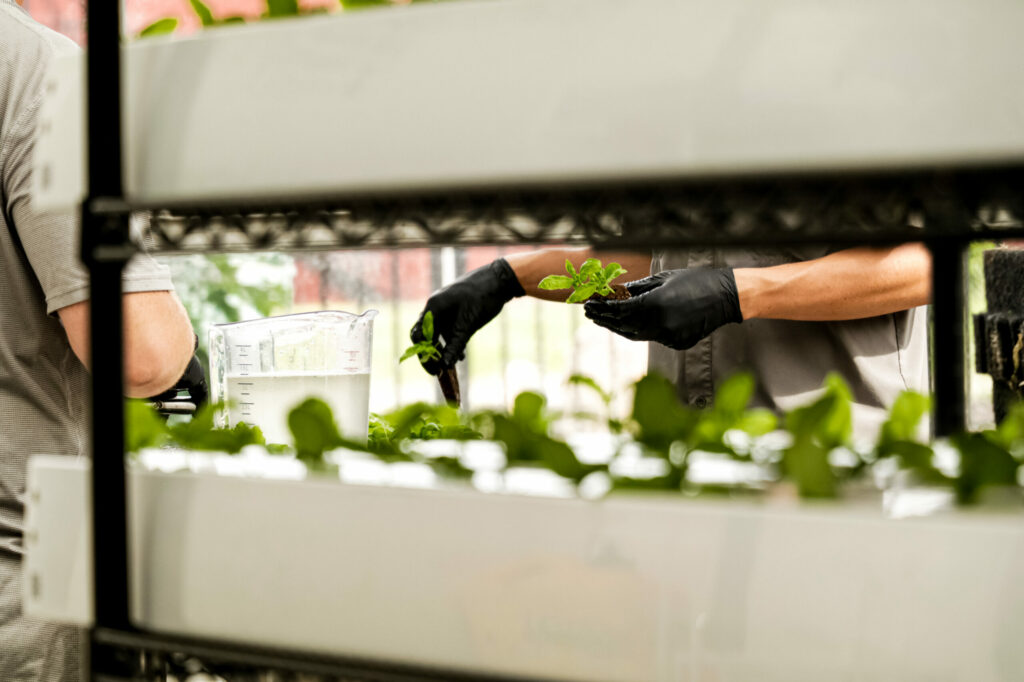 Hydroponics is simply the production of crops without soil.

Hydroponics is also an answer to two of the world’s growing concerns: diminishing soil quality, and water scarcity.

Also, food safety concerns attached to traditional agriculture, such as high pesticide use and metal contaminants in the soil, are significantly more manageable if not entirely erased in a hydroponics production system.

The difference between aquaponics and hydroponics

Aquaponics is a combination of aquaculture (fish production) and hydroponics (soilless plant production).

The main difference between the two is that aquaponics uses primarily fish waste to supply the necessary nutrients to grow plants, while hydroponic production uses a nutrient fertilizer which is added to the water at specific levels (depending on the crop) to keep plant growth at the ideal level.

Hydroponics is much simpler than aquaponics

In aquaponics, fish are typically a complicating factor.

For one, you’re doubling the amount of living organisms you have to try not to kill. Before you had to just worry about keeping your plants alive, now you have to make sure your nutrient source (the fish) stay happy and healthy too.

Hydroponic farming systems are typically much more simple, needing only the main components of a sump tank, plant production apparatus (grow bed, rafts, towers, etc.), and plumbing (with a pump, tubing, filters, and a drip system).

In hydroponics, your system’s plumbing can be much simpler as well because you’re not trying to deal with fish solids floating around and clogging up your pipes or drippers.

Without the solids from fish waste, hydroponics plumbing possibilities are not limited to straight fittings without membranes or other obstructions like aquaponics plumbing is.

The ability to use fixed volume drippers (we recommend starting out at about two gallons per hour) may seem insignificant, but it’s not. The fact is that you’re able to run your pumps at lower volume (saving some energy), while also reducing your overall system complexity (by not having to worry about system biology).

Another simplifying bonus of hydroponics over aquaponics is that you don’t need to wait for the system to cycle before reaching best plant growth.

Aquaponics is largely dependent on microbes for nutrient availability. The two main microbes are Nitrosimonas and Nitrobacter, which together oxidize ammonia to nitrate. Until those two microbes are established, you cannot produce, and it can take up to six months to reach peak efficiency in your system.

Not only is hydroponics simpler, but initially cheaper. Where in aquaponics you may need back up capital to buffer your losses during the first six months, in hydroponics you can put together a system and start growing- the very next day if you wish.

What are the global implications of hydroponics?

Currently, hydroponics is a first world tool, as it’s potential is primarily geared toward nutritive crops. In the developing world, priority tends to be placed on caloric crops, not nutritive crops.

We expect that as the balance shifts toward nutritive crops, hydroponics will become more used as a production technique.

On a water conservation level, hydroponics is much more efficient than traditional agriculture and can be a potential solution to both the water scarcity and food scarcity issues in the world.

Getting started in hydroponics has never been easier

With a design that makes using ZipGrow™ Towers so simple to use, it’s no surprise that they’re the leading hydroponic equipment in the world.

Farmers and home growers are discovering the exciting possibilities that ZipGrow™ brings and enjoying the community of people who grow the smart way.

Join that community today with a simple system: