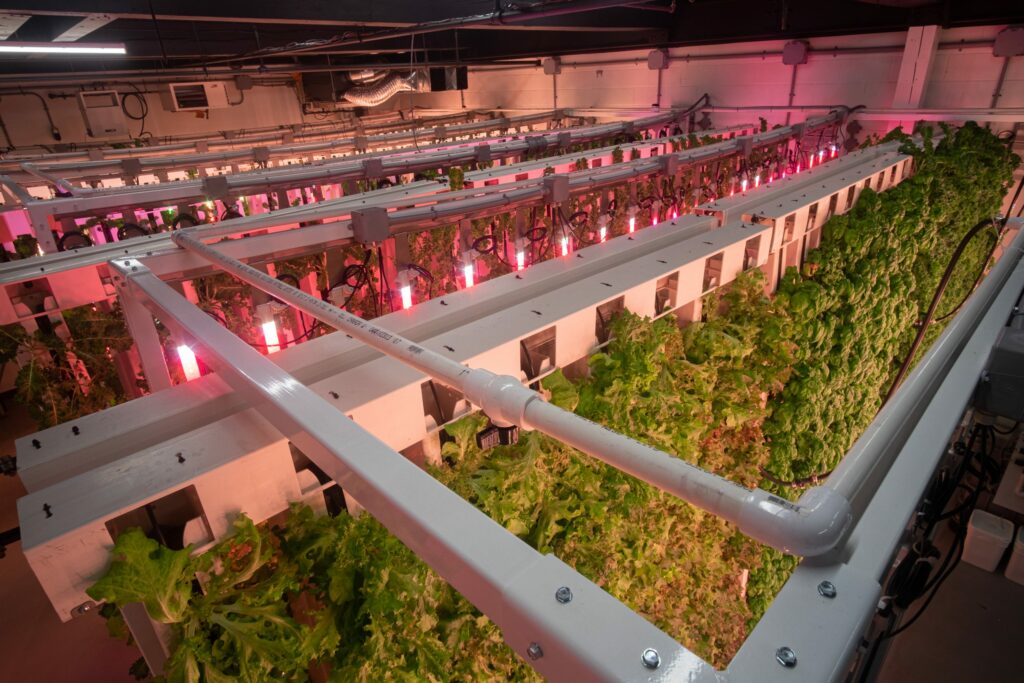 The future of urban agriculture is up for grabs. It is estimated that 83% of the U.S. population live in urban areas and by 2050, 68% of the world population is projected to live in urban areas. Many first-generation farmers are working to bring agricultural activities into the city. Startups and investors are getting involved. AgTech is the new queen of green!

In 2015, ZipGrow™ technology was used to create the world’s largest food-producing living wall and gained widespread recognition at the World’s Fair. Since then the ZipGrow™ Towers have become a core component of many of the world’s most innovative farms.

Most of the vertical farms you see in the media are massive facilities, with 200,000 square feet of production and five tiers of rack space. When it takes millions and millions of dollars to get in, it’s not really making it accessible to everyone.

The ZipFarm™ was designed in 2015 as an intermediate technology that does not require a huge capital investment. The modular, scalable system allows small producers to impact their communities. The idea that one person in a relatively small community – say a town of 30,000 or 40,000 people – can put in a ZipFarm™ and serve their market is making rise to urban farming opportunities for local entrepreneurs.

One such successful example of this is Christian Gerig, from Lokal365, who grows fresh herbs in his ZipFarm™ in St.Gallen, Switzerland. His main goal is to offer fresh produce without the use of pesticides.

You can read more about Christian’s story here in our blog and watch this YouTube video to learn more about his experience as a modern farmer.

The eight-foot ZipFarm™ Towers provide commercial users with the opportunity to grow crops year-round from indoor hydroponic warehouses. The mobile vertical growing racks are capable of growing hundreds of pounds of plants and one to two workers can maintain an introductory farm, the equivalent of 450 Towers as a Monday to Friday job.

Many ZipGrow™ farmers have no previous knowledge of any type of farming. They are entrepreneurs with the common goal of localizing food sources. They start out small, focusing on strategies of how to deliver based on local market research and initially grow one or two crops to take advantage of full crop capacity.

This often allows them to reduce labor costs and expand as buyer demand increases. ZipGrow Inc. provides a full-service support team, along with online learning courses, webinars, and YouTube videos in order to help support their operations and business growth.

The future of the food – hyper localized

Commercial farmers are growing a variety of foods in their ZipFarms™ such as peppers, cherry tomatoes, herbs and leafy greens, re-connecting people with what they eat. The ability to hyper localize these products means that food can be distributed within hours of harvest, rather than days or even weeks.

Thinking up instead of out!

ZipFarms™ increase yields by growing healthy greens and vegetables vertically, and makes indoor growing profitable. The truly vertical systems are lightweight and modular with easy management. ZipFarms™ offer space and labour efficiency. They can be stacked in tight for maximum production and offer scalable solutions as businesses grow.

Throughout the world there are many places where food production is limited by factors such as available arable land, soil quality, rainfall, and limited exposure to natural light.

It is estimated that by 2050 demand for food will be 60% greater than it is today as populations grow and issues with supply chains and product lines increase. ZipGrow Inc. believes that everyone should have equal access to high-quality, sustainable produce and their mission is to create a better food experience, both for people and the planet.

You can find out more about commercial indoor vertical farming systems on our website or by contacting our team at [email protected].