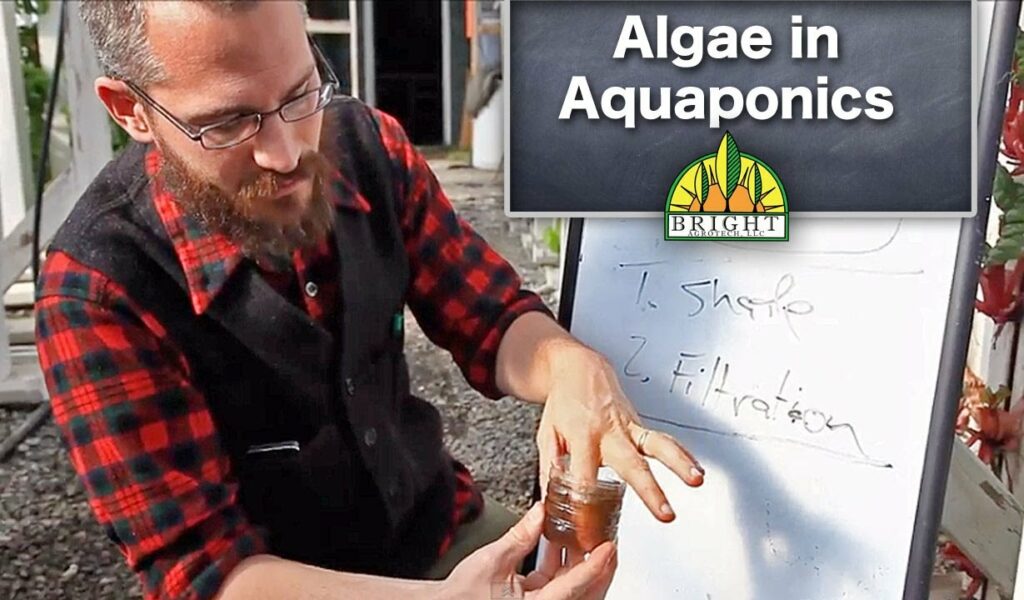 The Issues With Algae

1. Algae can die off or accumulate in grow beds and consume oxygen, leading to dangerously low levels of oxygen when electricity or circulation fails. Algae also consume oxygen when it is dark, and can deplete system DO (dissolved oxygen) if too much accumulates in the system

Decomposition of algae isn’t typically a problem in aerobic environments.

Decomposition consumes a lot of oxygen, so when the decomposition of algae (or any other organic waste for that matter) happens beneath the surface of the water, often oxygen is consumed faster than it can be replenished. When this happens, all of the aerobic organisms in the system suffer, including bacteria, fish and plants.

For this reason, accumulating algae should be removed from the system as it begins to die off, or minimally, more aeration should be provided to the system as algae blooms begin to die off (either through aeration or circulation).

Algae can also cause oxygen problems when it’s dark. During the day, algae essentially create their own oxygen by splitting water molecules. As they create oxygen, they’re also consuming CO2 to build sugars.

At night, when photosynthesis ceases, the algae begin to consume oxygen, but cease to produce it. This can lead to oxygen depletion in the dark.

In the middle of an algae bloom, many practitioners who are measuring dissolved oxygen (DO) can be very confused. They might notice that their fish are stressed or dying, but all system variables are OK, even DO, which they measure late in the morning or afternoon. However, if they sneak out at 2 or 3 in the morning to measure DO, they might discover the source of all of those stress symptoms- DO depletion due to too much algae consuming too much oxygen in the dark.

Algae cause pH swings because they consume CO2 during the day when the sun is high and photosynthesis is at it’s peak. CO2 is a weak acid in your system solution, so as the algae remove it from the water, the water pH will rise, oftentimes as much as a point or two! This can be very confusing for the beginning grower as pH may be low in the morning and shoot up in the late morning and afternoon, only to drop again late in the evening. If you don’t understand that algae in your system is causing the problem, it seems like your system chemistry is going crazy!

To go on the offensive and deal with algae, the two easiest methods are shading and mechanical filtration.

Shading is the easiest method to reduce algae in your systems. Green algae needs light to grow and reproduce, so to get rid of them easily, simply shade your fish tanks with a dark colored tarp or piece of plastic. Many growers will also paint the white (and often transparent) plastic used to hold system water black (on barrels and IBCs) or do a layer of black paint and then white (to prevent the water from heating up), to prevent algae accumulation on the inside of the plastic.

Similarly, if you struggle with algae accumulation on the surface of your gravel, shade the surface by adding enough rock or gravel that the surface of the water is covered. Shading denies green algae the light it needs to survive, and will dramatically reduce a system’s problems with algae.

In many systems mechanical filtration plays a big role in algae removal. Oftentimes this equipment is very expensive, but it can sometimes be made inexpensively. This type of equipment includes filters, screens, vortex and centrifugal settlement equipment, settlement tanks and other mechanical means of removing algae from the solution.

In our greenhouses we use ZipGrow Towers, which act as a massive mechanical filter, physically capturing and removing algae from the system. This is another great method for removing algae, and many systems employ physical removal whether they realize it or not. If you have a grow bed on your system, it functions as a mechanical filter, straining algae out of solution.

3) Other Techniques (a trade secret)

There are many other techniques, including the use of Ultra Violet clarifiers, barley straw, etc., but one of my favorite techniques is the use of humic acid to “darken” your system water.

In very shallow water, adding humic acid to a system can actually stimulate algal growth, but in deeper waters, the use of humic acid darkens the water and shades out the depths of the tank. Humic acid is a great addition to your system whether or not you have issues with algae. It’s great for your fish and your plants and can help chelate a number of important plant nutrients. The shading effect it exacts on algae in deep systems is really just a bonus.

Some of the other techniques out there are worth exploring, but are oftentimes too messy and expensive to justify.

In the end, the best treatment is a combination of shading and filtration combined with patience. Algal blooms are an important part of any system establishment.

“When you build a system, you’re really constructing an ecology, and with that ecology comes a break-in period, where new organisms are colonizing the system, fighting for control and finally reaching a steady state- establishing a stable population.”

Algae is great at colonizing, and will always be an important part of nutrient cycling in any system, but it seldom causes serious problems in the long run. Give it enough time, and it will eventually die back and find a balance.

So be patient, and see what happens. The hardest part of establishing any aquaponic system is waiting! Shade, filter and wait, and your algae problems will eventually disappear.

Algae is rarely an issue in hydroponics, but if it is, you can probably solve it by using a UV clarifier and shading.