Edible Learning Lab: The 3 Things You Need to Start a School Garden 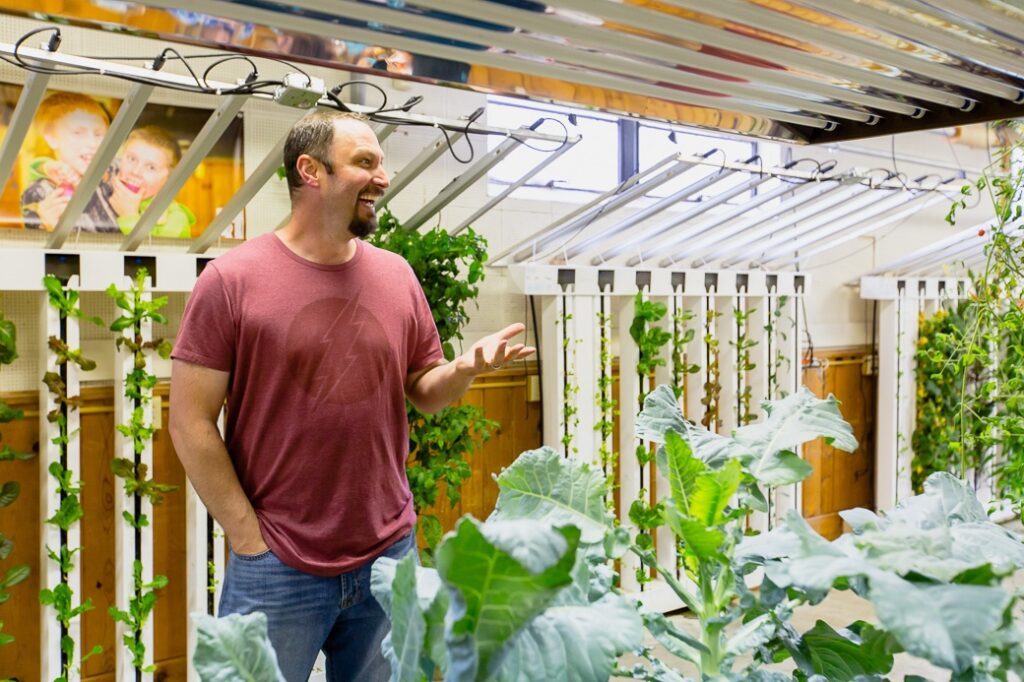 You might not expect to find a garden in an old basement music room in Buffalo, Wyoming. Nevertheless, the wood paneled walls are lined with vertical gardens, LED lights hang from pulleys, and raised beds fill the room with green. In beanbag chairs, elementary aged students lounge, raising hands and calling out questions as they’re walked through the agenda for the day.

This is the Edible Learning Lab, where 6-10 students gather after school to manage and learn from their garden.

Tim Miner with Modern Steader runs the Edible Learning Lab – an afterschool program for students to learn through the process of food production from soil to table. 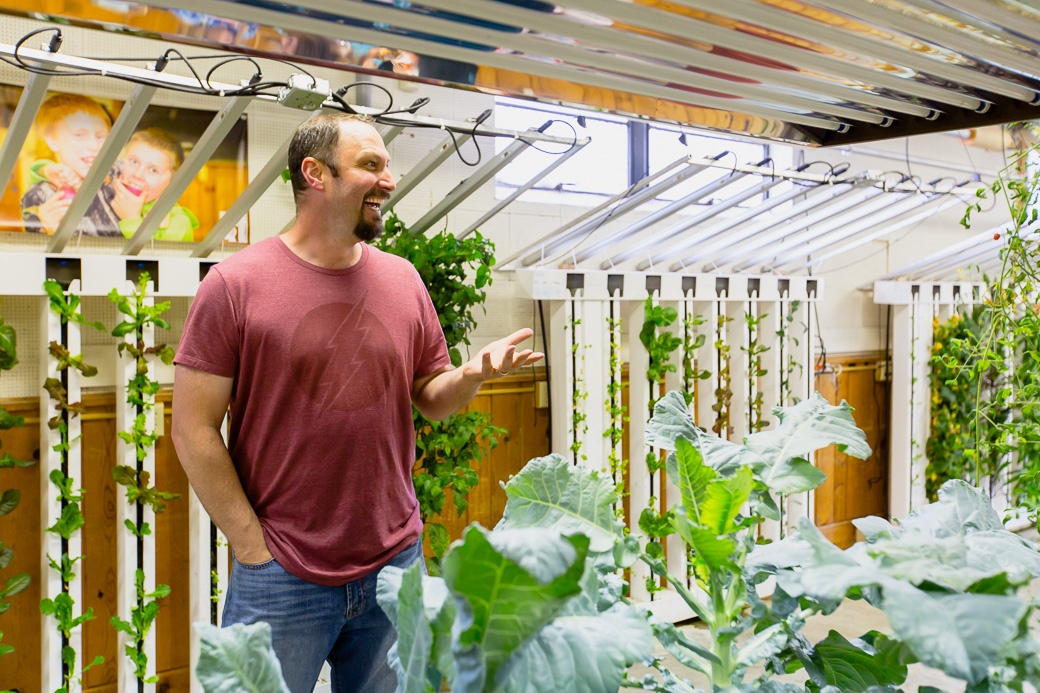 Four years ago, Tim Miner and landscape architect Dave Creech were both gardening in the mid- and southwest. Both having a keen interest in farming and sustainable food production, they built their hobby through the Steader Letters – public online letters back and forth covering the processes from growing food in their own gardens to cooking food in their own kitchens.

This continued for a while, and they built a following.

During this time Tim moved to Wyoming, and he began to realize that his upbringing in an environment ripe with culinary knowledge (his mother a chef and his father a great cook) was not the norm. Being an avid gardener and home chef himself, Tim understood the work, care, and resources that went into food. He also began to see that this understanding is greatly lacking in homes today. 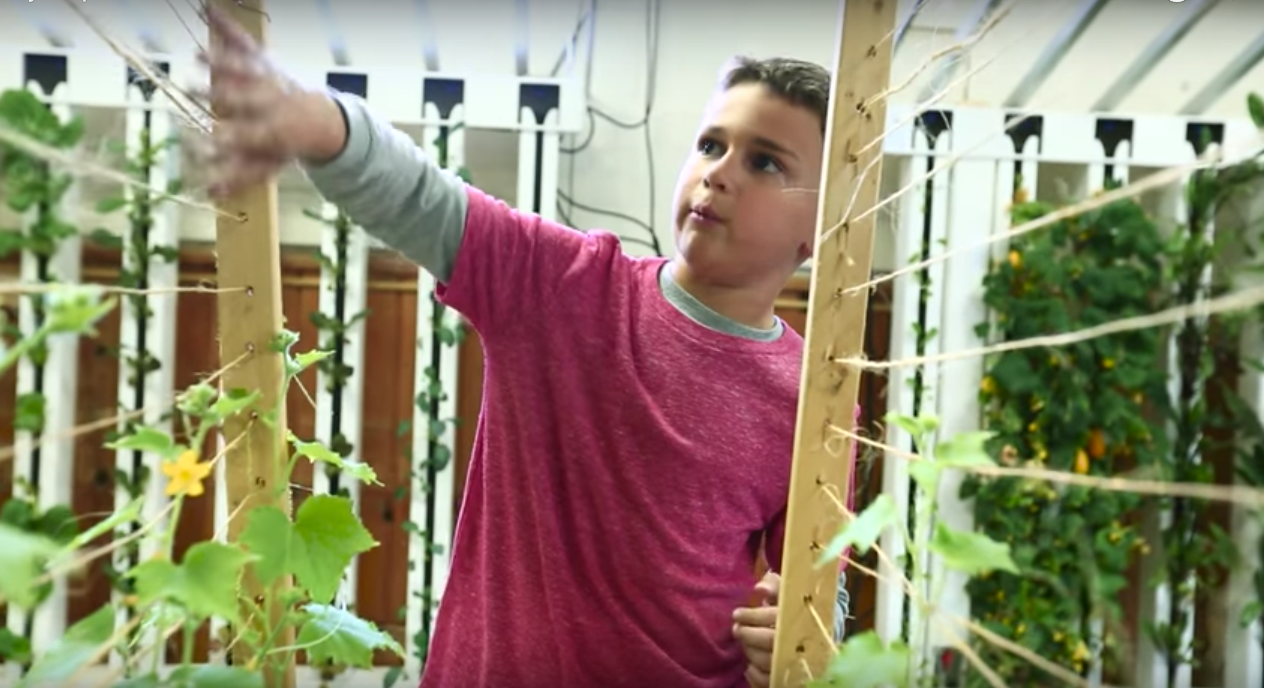 CEO of the Boys & Girls Club of the Bighorns (also in Buffalo) Lisa Muellershared Tims concern for the disconnection of this generation from food. She approached Tim with a request: could he turn the Modern Steader curriculum – which at the time was built for adults – into a curriculum for kids.

Tim said he could. The cradle of the curriculum would be the Edible Learning Lab, an 8-part lab where kids could come after school to grow, eat, and learn about healthy, homegrown food.

There are three things needed to start a school garden or a program like Edible Learning Lab:

To bring the Edible Learning Lab to life, they would need funding. With the help of Tim Miner, Mueller applied for the 21CCLC Cohort 11 Grant (21st Century Community Learning Centers Program Competitive Grant: Cohort 11), a grant available in multiple states across the US. In September of 2015, they received news that the Edible Learning Lab was among one of the few programs to be awarded the maximum amount.

This was the first time that seed to table program had been awarded a grant through 21st Century in Wyoming.

With technologies like LED lighting and ZipGrow Towers, gardening is possible almost anywhere. Environmental control tools give farm builder the ability to make any location suitable for crops, and space-efficient growing tools mean that not much space is needed. 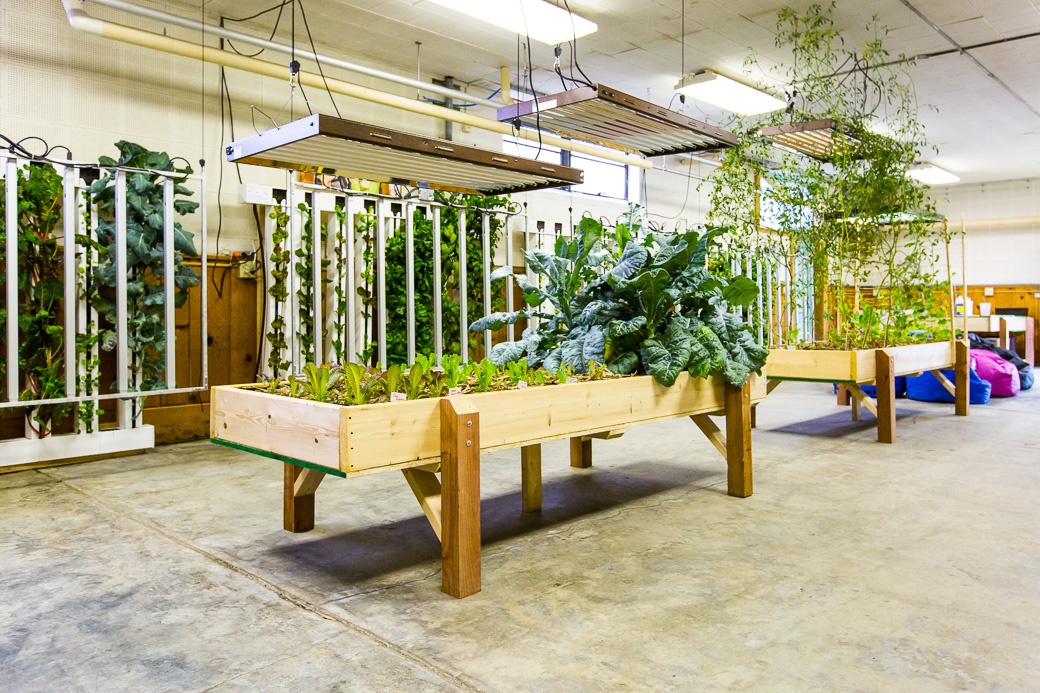 The Edible Learning Lab is located in the previously unused basement of the Girls & Boys Club. This is just one example of using unconventional space to grow food. Other classroom gardens are located in hallways, in sheds, and in the classrooms themselves.

Solving the people (and knowledge) problem

The result: incredible engagement and learning

Tim wasted no time building the lab, and in late October of 2015, students started showing up to help. Now the kids perform almost all of the tasks to run the system and maintain plant growth.

All hands on deck for the @zipgrow #farmwall hydroponic towers! Our #EdibleLearningLab students had a blast and showed great teamwork on transplant day… #modernsteader #garden #gardening

The curriculum surrounds eightsystems, six of which are currently running in the Edible Learning Lab:

The students are involved in every part of these systems, from building soil for the raised beds, to checking moisture and feeding vermiculture bins, to creating planting schedules from plant production estimates, to taking pH and EC measurements from the Farm Walls. 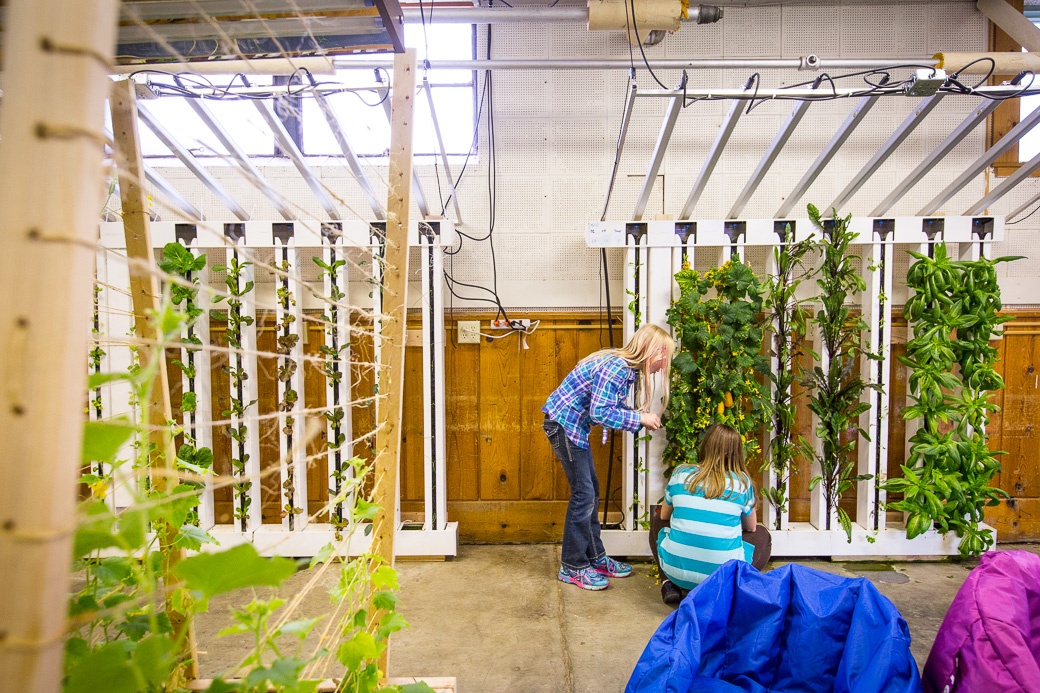 Craig believes that hands-on learning, a practice often missed in education, is a crucial part of learning. Not only does it give kids the opportunity to learn decision-making and responsibility, but hands-on learning raises their expectations of what theyre going to learn– and in turn, how what they learn will impact their daily lives.

Sometimes we dont give kids the credit they deserve; we sell them short. With learning labs like this, its amazing to see kids step up to the next level.”

The involvement of the students was very apparent during a recent visit to the lab as the kids talked about tasting, explained the set-up of the garden, moved Towers, planted, and of course, snitched leaves and fruit as they harvested. Its hard to keep anything ripe on the plant, said Tim with a chuckle.

Two students explained as they hand pollinated several cucumber plants. The girls explained how they took the stamen of the male flowers and used it to pollinate the female flowers.

We dont have bees in here, and this is the bees job. When they stick their feet inside the flowers they take the pollen and then they spread it to other flowers. And we dont have any bees in here, so we have to do it ourselves.

Later, Tim cut open a cucumber and sliced it for the kids to taste, explaining that without the kids pollinating the flowers, the cucumbers wouldnt be there. Were human pollinators, replied one student. Another stated his own conclusion from the lesson: Were awesome.

Beyond daily tasks, Tim is teaching the students through experiments like comparing nutrient uptake between soil and hydroponics, and using different wavelengths of light on plants to see differences in growth.

The lab is growing about 60 different varieties of plants, including:

The Edible Learning Lab in a program that walks kids through the food production process, from soil to table, says Tim. The kids are learning about this process, really from cradle to grave.

Our goal really is to have an impact on the health and wellness of this generation.

What does the future hold for the Edible Learning Lab? 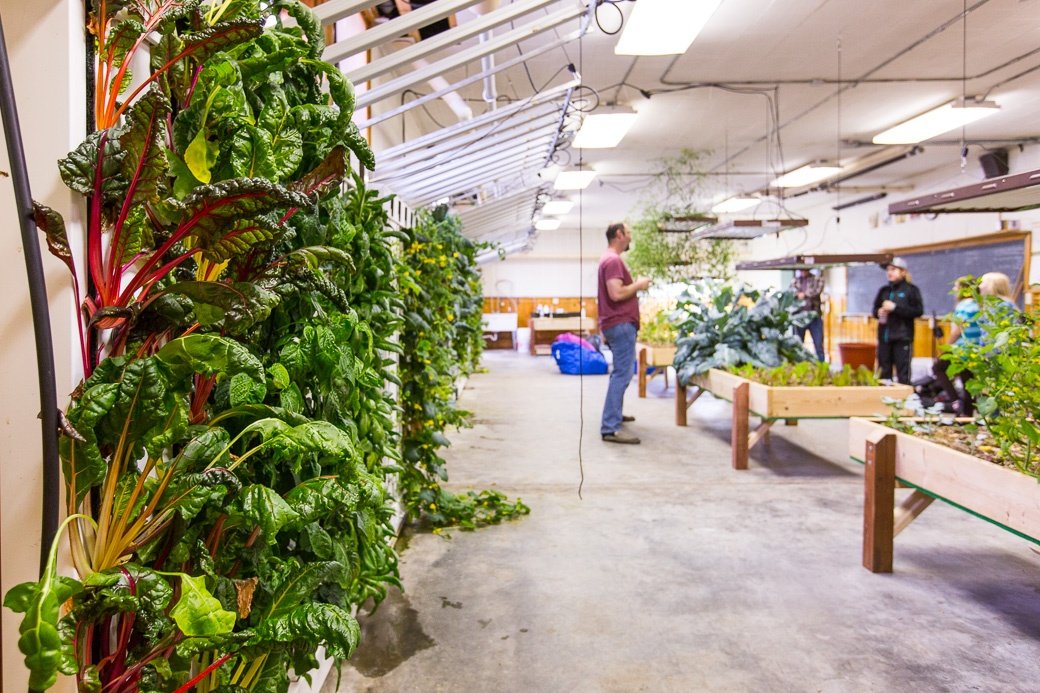 True to the dynamic attitude that got the Edible Learning Lab on its feet, the team has more plans in the works, starting with adding new systems to the six that are already part of the curriculum:

The Teaching Kitchen will use an empty room, repurposing tables, and food grown in the lab to teach students cooking techniques through a series of 25-30 recipes. There will even be a microgreens station to use for flavor components in the teaching kitchen.

The Seed Library will teach students to harvest and store seeds, and will be open to members of community to buy and exchange seed from the library. Both Baker Creek Seeds and the Seed Saver’s Exchange have donated seeds to the project.

The Rain Harvesting System will equip the lab to collect water so that they don’t have to deal with chlorine in the tap water.

Eventually, the Edible Learning Lab will grow into a high tunnel.

Craig hopes that the Edible Learning Lab is put to even more use by growing food for the school. Imagine kids faces when they see salad on the menu and they know that the lettuce is coming right from the lab that’s in the back of their school [and] that they’ve helped plant, they’ve helped grow, nurture, and nourish it.”

Tim is currently adding on to the existing learning lab curriculum (which is available for purchase online) and making it applicable to teachers and lab leaders all over the US, and beyond.

What’s holding you back?

Tim hopes to see learning labs like the one in Buffalo spring up all over the country. Though obstacles like lack of curriculum have kept educators and community programs at bay for a long time, that’s changing. With curriculum provided by Modern Steader and communities full of partnering organizations, the only thing needed is hard work.

Craig Kitto summarized the notion well as he stood in the lab surrounded by the learning gardens: It’s simple. Why wouldn’t we do this?

With resources like Modern Steader curriculum and ZipGrow Tower equipment, it’s possible for any school to start an educational garden. So what are you waiting for?

Learn about starting your own educational garden! 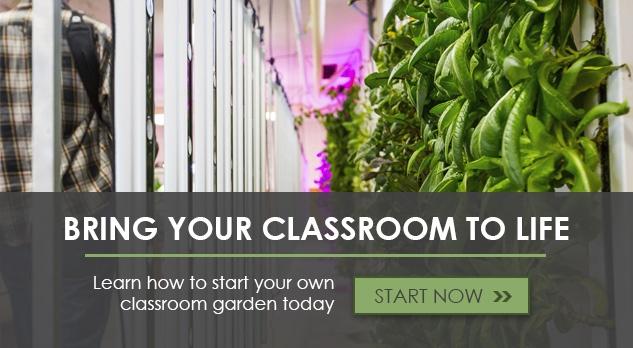